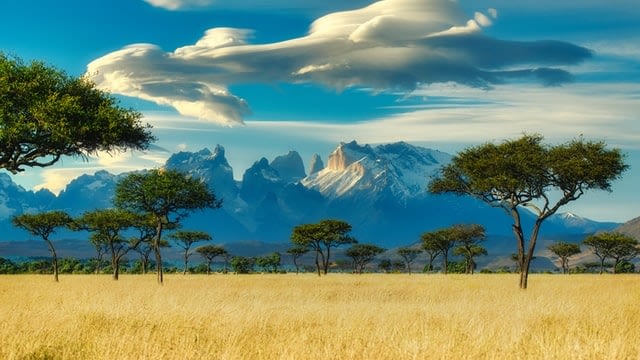 When you talk about Africa, what comes to your mind is wildlife and safari but there is more to the continent than that.
Africa has many beautiful locations that will leave you awestruck.So pack your bags and let us explore what this beautiful continent has to offer.

Head for the Hoggar Mountains in Algeria.

Drop in the North African country of Algeria. There hike up the Hoggar Mountains located in the southern part of Algiers that is the capital of Algeria.
The mountains stand at 9,541 feet above sea level making hiking a memorial experience.
You can also explore the oasis at Tamanrasset for a rest and take pictures to capture memories.
It is also located in one of their national parks, is also a fun place to visit.

You can also visit the prehistoric settlement and the tomb of Tin Hinan, woman believed to be the first matriarch of the Tuareg at Abalessa around the area.

Float in the salt lakes in Sal, Cape Verde.

Cape Verde is an archipelago on the northwest coast of the African continent can boast of incredible places like the salt lakes.
Salt exportation was the core of the country’s economy in the 19th century when most of its production took place on the island of Sal. Although production has stopped long ago, the mines and lakes stand as a reminder of the country’s past. These lakes are a unique sight to behold.
You can take a dip and float in the salt lakes like the Dead Sea. But don’t let the water enter your mouth though.

Explore the ancient Roman ruins of Volubilis in Morocco.

This ancient city is at the foot of the Atlas Mountains, two hours from Rabat, the capital of Morocco.
Be transported back in time in Volubilis. It was considered the capital of the ancient kingdom of Mauretania. The Romans occupied it in 146BC.
The ruins can boast of Roman basilicas, the Capitoline temple and more.It is a UNESCO World Heritage site for being an outstanding example of an ancient Roman city.

Go snorkeling in Logoa Azul in Sao Tome and Principe.

The bay of Logoa Azur is in the northern part of Sao Tome and Principe is an island country in central Africa.
It is surrounded by huge baobab trees that house different exotic birds.
Lagoa Azur which means blue lagoon in English is exceptional with warm clear waters filled with all kinds of fish, squids and octopuses.
This makes it an excellent place for snorkelling. It also has beaches that makes it a good place for surfing and picnics.

Sail to the Citadel of Qaitbay, Alexandria Egypt.

This 15th-century fortress built by Al-Ashraf Sayf Al-Din-Qait in 1477AD is one of the historical sites you can explore in Alexandria, Egypt.
It is in on the northern tip of the Pharos island at the mouth of the eastern harbour of Alexandria.They built the citadel as a defensive fortress against attacks from the Turks.
I t is also also good to know it stands on the exact location of the famous lighthouse of Alexandria, which is one of the seven wonders of the ancient world.Take a tour of its ground and interior and go back to ancient times.

Go into the badlands of Erte Ale, Ethiopia.

Ethiopia also known as the horn of Africa is in east Africa. It has the most UNESCO heritage sites in Africa and many natural wonders.
The region of Erte Ale which means Smoking Mountain in Afar language houses the Erte ale volcano. It is in the Afar region, northeast of Ethiopia.
Erte Ale is the world’s longest existing volcano and lava lake.You can hike up Erte Ale and watch the lava lake’s activity.
These are some of the exciting places in Africa worth visiting. Explore them and let me know what you think.

7 cheap and exciting destinations you need to visit.

7 exciting places to see in Mallorca: Gem of the mediterrean.